Got my vote on this morning (while breastfeeding!) and I hope you’re all doing the same! Be a part of the democratic process!

Walking quickly to the end of the parade because we were very late and could hear it coming. Didn’t miss any! 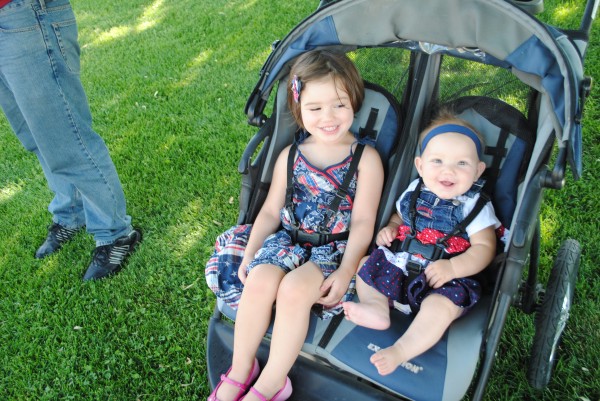 The girls love our new (to us) jogging stroller. Mama loves that it’s easier to exercise!

Peanut thinks the whole purpose of the parade was the floats throwing candy at us. 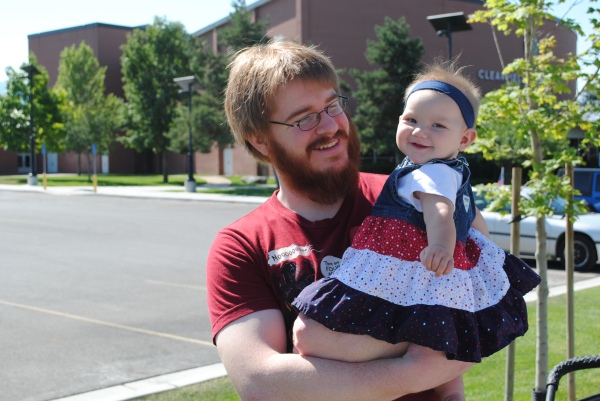 Peanut’s favorite part of the parade was the princesses. She asked if we could go to their houses.

Twig’s favorite noise at the moment is “ahhhhh!” Can you tell?

This is our “calm down” chair.

I’ve never liked the idea of time-out. In the past, we’ve done time-in, which is great. Peanut knows she’s not in trouble and I can remove her from the situation. We even got to the point where I didn’t have to say “let’s go to time-in” and leave the situation most of the time, she would just come cuddle with me and we’d talk about what the problem was (e.g. “Why did you hit so-and-so? It hurts when you hit someone. You don’t like it when someone hits you, right? We need to be nice to our friends or they won’t want to play with us.” and so on). We always ended time-in with a hug. She always calmed nicely once she was cuddling me and we could have a rational (as much as possible for a toddler) conversation.

Then Twig was born.

Of course, I’ve started seeing my therapist again. Just the mere fact of figuring out that the rage I was feeling was a form of postpartum depression helped. I purposely worked on changing my attitude and calming myself when I was starting to feel out of control. This has all helped with the me side of things, but not with the Peanut side.

With the Peanut side, she’s been getting better. It’s not melt-downs all the time, but she’s still emotionally high-strung. She’s not quite as defiant, but she’s still not listening when I ask her to do things, even good things. She’s still pushing my buttons, but I’m better able to deal.

So back to the calm down chair.

Time-ins were no longer working. I needed to separate her from the situation, which was most of the time me (or it’s Twig, who is on me). When she’s freaking out because I said no she can’t have a cookie or she’s jumping hyper-actively on the bed Twig is laying on after I’ve told her to stop a billion times, she needs to be removed from the situation. When I’m getting overly upset because she’s still not listening to me, I need to be removed from her.

So I started looking into how to do time-out. I couldn’t reason with her when she was all wound up. Every parenting book and every study on the subject said that children are not rational when they’re upset. When you’re upset, your “logic” part of the brain turns off. Regardless, I immediately hated everything the time-out “experts” said. The idea of time-out still just feels wrong to me, so I made up my own thing. The calm down chair. Here are the calm-down chair philosophies and how they differ from time-out.

No shame. There’s nothing wrong with needing to calm down. Everyone needs to get themselves under control every once and a while. The biggest problem I have with time-out is the shame factor. When you go into time-out, you’re forcibly removed from your peers and put on display. If I were at, say, a La Leche League meeting and made a comment, then the leader told me to go sit in the corner or put my nose to the wall, I would feel mortified. Why would I do that to my child. Instead, we’re just separating from the situation. I try, as much as possible, to be calm and say matter-of-factly “Go to the calm down chair.” If I can keep it calm, it’s just a normal part of life. Which brings me to my second point.

No punishment. Once again, everyone needs a minute to get a hold of themselves at times. There are no timers in the calm down chair, just sit there until you’re calmed down. Originally I told her no books in the calm down chair, but I’ve since changed my mind on that. If reading a book calms you, great. I know it calms me. It’s normal to need to get a hold of yourself every once and a while. Adults don’t get punished for needing to take a breather.

The calm down chair is for everyone. I know I keep saying this over and over, but it’s normal to need to calm down. The difference with small children is that they don’t necessarily recognize when they need to calm down. Instead they just keep getting more and more worked up. This is where, as a parent, I step in and help her recognize that need. For myself though, I know when I need to calm down. I don’t necessarily want to do it, but I can see when I’m spiraling out of control, so I use the calm down chair. It actually works! And Peanut understands what I’m doing! Whereas if I were in the same place getting more and more frustrated, she would just keep climbing all over me and running around screaming and doing what I ask her not to and all of the fun toddler things. If I tell her I need to go sit in the calm down chair, most of the time she will leave me to it. Separating myself and just relaxing for a second helps me get my cool and then I can return a much happier mama.

I’m working on keeping myself calm when I tell her she needs to go calm down because I don’t want her to see it as a bad thing. Anger is a normal emotion and it’s alright to feel it, but we can’t act on it by hitting mama or pulling the dog’s hair. Sometimes it’s not even anger, but rather a toddler ball of energy that’s not being utilized in nice ways. This is all okay. This is all normal. We just have to learn how to get ourselves back to a calmer place if we can’t get that anger or energy out in nicer ways.

I’m not sure if any of this makes sense and it may not be kosher in the natural parenting world because it’s similar to time out, but I don’t care. This is what is working for my family right now. I needed something to keep both Peanut and myself under control with the new stress of being a family of four and taking care of Twig and so I created something I can live with. I’m writing this post so that other moms in my situation of having problems with time out, but other solutions aren’t working, can know there is a middle ground. There is a way to separate yourself from your child without some of the problems of time out. Needing separation is okay.

None at the moment!
If you'd like to sponsor a giveaway, email me

Want to become a sponsor?

It's All About the Hat